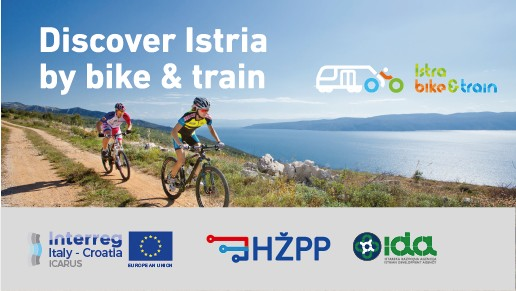 Discover Istria by bike and train through the ICARUS project

The aim of the project is to promote ICT technology, multimodal transport and behaviour change in order to foster the use of alternative and environmentally friendly transport, which confirms the promotion of rail transport in Istria, as well as hinterland and coast connection such as new bike route of Rovinj and Kanfanar that redirects cycling transport on the road to the former route of the railway line. It will also generate the development of economic activities in this area and promote local producers.

In addition to regional connection, there are also maritime ones from coastal cities to neighbouring Italy whose partners are also involved in the project with a total value of € 2,200,000.00.

From autumn this year, the train in Istria will continue to operate the standard route from Pula to Buzet and all passengers will be able to take their bikes in it, get information about the bike routes and continue their journey cycling from Kanfanar or Pula, Pazin and Lupoglav where it is also possible to rent the e-bike.

The ICARUS project is upgraded with the MIMOSA project, in which the Istrian Development Agency will work on digital platform “Via Istra” and Smart card application that will integrate available forms of transport, services and other facilities in one place.

Information about the train stations and Croatian railway you can find on the following link: http://www.hzpp.hr/en