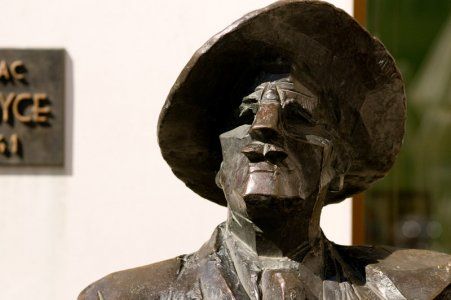 An unusual life story of the man and artist in his “escape from history”, a concatenation of destiny events, when looking for a job after leaving Trieste Joyce arrived in Pulaon October 1904 and stayed till March 1905. In Pula, the Austro-Hungarian imperial royal naval base, James Joyce worked as a professor of English at the Berlitz School, teaching mainly the Austro-Hungarian officers in the town with Naval Shipyard. Already in Pula James Joyce was imbuded with the “Ulysses picture” of the modern man’s split personality.

JAMES JOYCE – with full name James Augustine Aloysius Joyce, Irish poet, short story writer and novelist, is one of the greatest writers of the 20th century and pioneer of free written expression. Joyce is certainly most famous for his innovative modern prose style, particulary the narrative technique known as the stream of consciousness. He was born in Dublin (Ireland) in 1882, and died in Zuerich (Switzerland) in 1941. His most renowned works are the short stories “Dubliners”, the novels “A Portrait of the Artist as a Young Man”, “Ulysses”, and “Finnegans Wake”, and the collection of poetry “Chamber Music”. The memory of James Joyce in Pula is breathed near the old Roman Arch of the Sergi at the Portarata Square in the coffe bar “Uliks” (Ulysses), just a few steps from the memorial tablet placed on the building where James Joyce taught the English language. Today, the bronze James Joyce is sitting by the table at the small terrace of Uliks coffee bar, waiting for the ordered espresso or a glass of Istrian Terran, having a break after strolling Pula at the start of a new century…

James Joyce has been sculptured in bronze by Mate Čvrljak, the sculptorfrom Labin and a representative of the contemporary Croatian sculptural arts. In the tourist town with the magnificient amphitheatre Arena, taking a photograph with Joyce in Pula is a part of everyday occurence album.