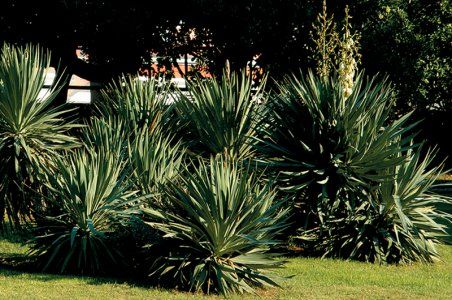 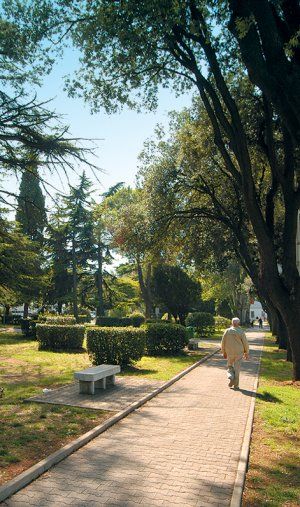 The park is triangular in shape and lies right below the classical beauty – Arena. It was and still is the destination point of every visitor. The entire park was a collection of topiary trimmed geometrical forms (spheres, cubes, cones, half-spheres), so that species which could be easily clipped and trimmed were used, such as laurel, guelder rose, box and privet. Unlike the paths in the previous parks, here they are regular and set at a right angle.

The central motif in the park was a fountain where a brass statue of Cupid was put up in 1897. It was removed after several years and in 1904 replaced by a statue of the Austrian Empress Elisabeth. The statue was destroyed and removed in 1934 and in 1940 replaced by the Roman she-wolf with Romulus and Remus. After World War II the Italian government removed it and in 1953, at that very site, a monument representing the Sailor, in honor of the mutiny of sailors in 1918, was erected, but again this monument was removed in 1995. During the Italian rule the park was named after Prince Umberto.
Species planted in this park were similar to those at Monte Zaro. One finds here cedar, cypress, yucca, chusan palm, European fan palm, laurel, oleander, yew and guelder rose.

Yew (Taxus baccata) is a protected plant species in Croatia, so it is a real treasure to have such beautiful specimens as park heritage. Everything on it is poisonous except the decorative scarlet fleshy aril enclosing the seeds. On the same plant are both male and female flowers, so nearby there should be specimens of both sex for the plant to bear fruit. Yew is ideal for trimming and forming various shapes and also adapts well to city conditions. Here, just as in Naval Park (Mornarički park), there are fine specimens of the coast sequoia, exotic species that will surely attract every visitor’s attention.

Common or Mediterranean cypress (Cupressus sempervirens) is a species found in almost all the parks of Pula. It is represented in two forms, horizontal and distinctly pyramidal, that is used as a vertical when designing parks. A well-known fact is that even ancient Greeks and Romans used cypress branches for disinfecting their homes. Apart from this, cypress essential oil is very useful for restoring the immune system; it is efficient when dealing with respiratory diseases and circulation and has an extremely soothing effect.
Yucca (Yucce gloriosa) originates from North and Central America. Its large, white and upright flowers already in late winter draw everyone’s attention. Today, just as a century ago, the most represented species in this park are laurel shrubs that are clipped and trimmed skillfully in various forms.

Laurel (Laurus nobilis) is a typical species for this region, which grows in areas between Mediterranean and semi-Mediterranean forests. It has lush cluster-like yellow flowers, whereas its leaves, wood and fruit are rich in essential oil. Therefore, one should have it nearby because of its therapeutic effect in the treatment of respiratory diseases. Laurel essential oil used as an air purifier helps to prevent infections. Apart from this, it is an essential spice used in preparing Mediterranean specialties, as it adds a special flavor. It is also believed that laurel protects from lightning, evil and contagious diseases, so it was often planted near houses. Laurel leaves have long since been a symbol of military glory, but resurrection as well, so ancient Romans used to adorn their doors with laurel wreaths for New Year.