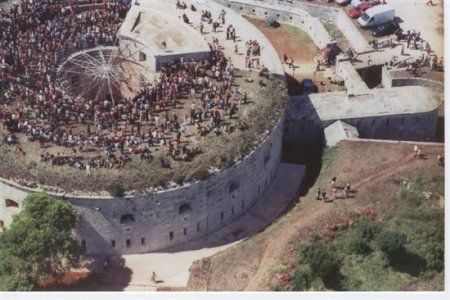 The city of Pula’s rich history is present in its many monuments that remind us of past times. The Roman amphitheatre Arena was and remains an essential motif in panoramas of this city that lies on the tip of the Istrian peninsula. Besides the iconic amphitheatre, the remains of the city walls, the Augustus Templum, the Twin Gates, and other essential motifs give the city an antique charm ever present on postcards of Pula. A hint of the former mistress of the sea can be felt at the Venetian fort of Kaštel. No visitor to the old Kaštel fails to be charmed by the views of the city and of the bay set deep into the land. This bay has protected Pula from the Adriatic Sea’s vicissitudes for as long as three millennia. Yet, few people know that Pula’s present-day appearance is indebted to Austria–Hungary, under whose rule the city lived out its most splendid days.

On the site of what was a small fishing town, Pula would grow to become the main military port of the grand Austro-Hungarian Monarchy. Formerly an abandoned town, it became a large construction site during the 19th century. A modern navy arsenal was built in the heart of Pula, while the tips of the city’s hills were white with limestone from which a chain of forts that would soon encircle the city was built. The colossal fortification system, of which Pula was proud, included 27 forts and around 60 batteries and strongpoints. Pula’s transformation into the strongest naval base on the Adriatic coast, whose fortifications were comparable in importance with the world’s largest naval bases, consisted of an arduous process of constructing and modernising forts – a process that took almost a full century.

Pula’s forts are now a reminder of the glory days; they are a first-class tourist attraction that has attracted an increasing number of tourists who wish to discover Pula’s sights from the time of the Austro-Hungarian Monarchy. A hint of the former empire can be felt almost everywhere throughout this city that housed the Austro-Hungarian Empire’s war fleet. Pula’s harbour has an enormous defensive system, and so this text only deals with the most important forts and batteries that you can visit – those positioned in or near the city.

Pula’s transformation into a military port began in the 1820s when the Martello towers were built. Nowadays you can only see one such Martello tower, at the Monte Grosso fort in the Pula settlement of Štinjan. The one-time Martello tower and the circular fort raised around it in the mid-nineteenth century were used to defend the entry point into the bay of Pula. At Monte Grosso, a watchtower was built that offers a breathtaking view of the city, the harbour defences, and Brijuni islands. On clear days, the view extends as far as Rovinj, the Kvarner islands and the Ćićarija mountain range. Just next to Monte Grosso, south of the fort, a forest path leads to the Valmaggiore battery and a complex of fuel tanks dug into Zonchi bay. The circular fort Munida can be found a little further along. Near to Monte Grosso you can find the fortress that was once the strongest and the most important in the entire fortification system. We can trace the history of Pula’s fortification through three developmental phases of construction: Martello towers, cicular forts, and polygonal forts. Besides the beautiful view that extends from its batteries to the Brijuni islands, Punta Christo has an underground section that visitors can explore, while visitors can also enjoy refreshments in its rooftop bar.

In the middle of the nineteenth century, a chain of circular forts was built. Today these are in the city itself, and they are very easy to find. The chain of circular forts begins in the north with the San Giorgio fort, located close to the city cemetery, and continues with the Monvidal and San Michele forts. Once, on Monte Zaro you could find a circular fort of the same name. To its south lies the fort of Casoni Vecchi, while the chain of circular forts ends with Bourguignon fort. While Bourguignon fort is not open to the public, it can be visited from the outside. In the very middle of the Pula bay, on St Andrew’s island, the large circular fort Kaiser Franz I can be found. Due to its open batteries, Kaiser Franz I. takes up most of the island’s surface area. Unfortunately, the fort is now abandoned and overgrown, and it can only be visited by boat on a self-organised trip. Once the Kaiser Franz I fort faced the large circular fort named Maximilian, located on the south side of the Pula bay, but it was completely destroyed in the 1960s. Today, on the site of the former fort, a shopping centre of the same name has been built, and its architectural features are reminiscent of the former fort. If you continue along the south side of the Pula bay to the former military area of Musil, you will come across the circular fort of Musil and the largest circular fort by the Adriatic Sea – Marie Louise.

The development of artillery pieces and weapons necessitated deep-rooted changes to the fortification buildings. The high circular forts became an easy target for increasingly powerful and destructive ship cannons, and so at the end of the 19th century, a chain of forts was built that were largely dug into the ground. Over on the north side of the city the Castelier fort was built at the entrance to Štinjan, and the Bradamante fort is at Veli Vrh. You can only visit their exteriors as both are used for commercial purposes. In Šijana wood, up by the airport, you can now find the abandoned San Daniele fort, overgrown with dense, evergreen shrubs. If you drive along the Pula bypass, you can gain a view of a hill made beautiful by the well-matched Turtian fort. The fort has been cleared, and visits are only possible if agreed in advance. The final fort in the chain forming the land ring is the Pomer fort, which houses a refuge for abandoned pets. The fort’s exterior can be viewed, and visitors often bring food for the animals that the civic association care for.

Besides the land side, two modern forts were also built on the coast to strengthen the Pula bay defences from the south and south-west. These are the Verudela and Stoja forts, and they gained their names from the city districts in which they are located. The Verudela fort is now part of the hotel complex at Verudela, and visiting it is easy. Moreover, it would be a shame not to visit a fort that houses an aquarium, and that is a good example of the revitalisation of Pula’s fortification system. Besides looking round the numerous aquarium exhibits and enjoying the wonders of the world beneath the Adriatic Sea, visitors can enjoy views from the fort that extend to the open sea.

And so we reach the end our walk through the fortresses of the one-time maritime fortress of Pula, at least as concerns those forts in or near the city. The area surrounding the fort of Pula encompassed a much wider region home to three more groups of forts. The Brijuni group consists of the Tegetthoff and Peneda forts on Veliki Brijun, and the Brioni Minor fort on Mali Brijun. Further north there is the Barbariga group, which consists of the Forno fort and Paravia West and Paravia East. This group was tasked with protecting access to the Fažana channel from the north. The military port of Pula’s defence system even crossed the borders of the Istrian peninsula, as its final south-eastern outpost ended on the island of Lošinj. There are two fortresses there, which are not accessible to visitors. Besides the forts presented here, visitors will notice the many artillery batteries close to the forts, some of which are themselves big enough to be compared with forts. Visitors seeking adventure while simultaneously discovering Pula’s rich military heritage are recommended to visit during the spring and autumn as these are the best periods in which to visit Pula’s forts. During these periods the tourist crowds are not as big, and the temperatures are more moderate. These seasons better suit the heavier physical activities that visitors might expect to engage in while searching for the still largely hidden tourist delights of the city of Pula.