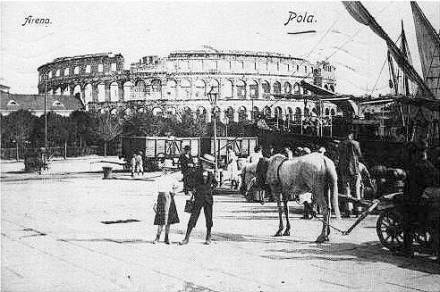 The legend of the Argonauts describes the pursuit of the Colchidians after the ship Argo and the Golden Fleece. The subjects of the king of Colchis gave up further pursuit after the death of their king’s son. Fearing that they would be punished for his death and the failure of the quest if they returned to Colchis, they decided to settle where the prince had died. Pula therefore became not only a harbor of refuge to the Colchidian fugitives, but also their place of exile. The most famous geographer of the antiquity – Strabo – claims that this is how Pula was founded and according to this legend, it was about three thousand years ago.

In the Illyrian period, until the arrival of Roman legions, Pula was no more than the surroundings of nearby Nesactium, the political, administrative, military and religious center. As a result of intensive colonization, good trade routes, as well as the importance of its military position, Pula took over the leading position. Numerous trades developed in that period: stone cutting for the many buildings in Pula and its surroundings, agriculture, viticulture, olive-growing, fishing and pottery for the transport of olive-oil, wine, wheat and fish.

In the Roman Imperial period (1st – 3rd centuries) the greatest classical monuments in Croatia were built in Pula. The most magnificent and surely central classical monument is the Amphitheater popularly called the Arena. This Amphitheater, used for fights and battles of men and animals, was built in the 1st century AD, during the rule of Emperor Vespasian. The ground plan is elliptical, its size being about 130 m x 105 m, and 32 m high, which ranks it as the sixth largest Roman amphitheater existing today. The Arena could once hold up to 23,000 spectators, whereas today it can seat some 5,000 people.
Classical Pula was supplied with all major achievements of Roman civilization, it had its water supply and sewage systems, Forum, which was the administrative, commercial and religious center, capitolium with temples (in the Forum), two theaters, large city cemetery (mentioned by Dante in his “Divine Comedy”), houses richly ornamented with mosaics and marble.
The city was fortified by walls and was entered through some ten gates. The greater part was destroyed in the beginning of the 19th century, so that only some of the gates have been preserved until today. The Triumphal Arch of the Sergi is situated at the end of the street (Via Sergia) leading eastwards from the Forum. This triumphal arch leaned against the city gate (Porta Aurea) so that only its western, visible side was richly decorated. This monument was erected at the end of the 1st century BC by Salvia Postuma Sergi with her own money in honor of three members of her family who held important positions in Pula at that time. According to the inscription on the arch, the monument was constructed between 29 and 27 BC. For centuries this impressive Roman monument has attracted the attention of famous artists, especially Italian ones, such as the great Michelangelo. Heading north there are two other remaining city gates: the Gate of Hercules and the Twin Gates.

Outside the city gates lay the cemeteries called necropolises. Fragments from monuments found at these burial areas are today kept in the Archaeological Museum of Istria. Not far from the Twin Gates are the remains of a sepulchral structure, octagonal Mausoleum dating from the 1st – 2nd centuries AD.
The Forum, the central city square of ancient and medieval Pula, was on three sides surrounded by arcades with statues and reliefs and on the northern side by temples. The Temple of Augustus, built between 2 BC and AD 14, has been completely preserved to the present day.
On the eastern slopes of the central hill of the city, present-day Kaštel, are remains of the Small Roman Theater with its scene, semi-circular orchestra and tiered section for the audience. The Large Roman Theater, situated outside the city, was completely destroyed; only a fragment of its relief on the exterior wall is kept in the Archaeological Museum of Istria. Close to the Small Roman Theater is the Archaeological Museum of Istria which today houses numerous monuments from the prehistoric, Roman and early medieval periods found in the area of Pula and Istria.

Pula before the 5th century

Owing to its geographical isolation Pula avoided migrations, plundering and invasions of the barbarians until the 5th century when it was conquered by the Visigoths and then Ostrogoths. Under the Eastern Roman Empire the town prospered and was given military importance in the conflicts between the Byzantine army and the Goths.

In the second half of the 6th century the Slavs began their invasion of the Istrian peninsula, and after dreadful fights the population declined while trade and manufacture came to a standstill. The new rulers of Istria, the Franks, brought with them the new feudal system which enabled the settling of Slav, Croatian farmers, but brought about the resistance of Istrian towns. With the development of feudalism and the establishment of city-states on its territory, Istria faced the arrival of Venice. In 1150 Pula swore allegiance to the Republic of Venice and accepted all the obligations towards it – to pay tribute, to build and equip galleys, to support it in wars, etc.

To the present day

Pula was thus bound to Venetian economical and political aims, which defined its development for the next few centuries. During the 14th, 15th and 16th centuries Pula was attacked and conquered by Genoese, Croatian-Hungarian and Habsburg armies, causing the devastation of numerous medieval settlements and villages.
Besides the war calamity, the population of Pula and Istria was decimated by numerous epidemics of plague, malaria, typhoid and small-pox.
As a result of the dilapidation of monumental buildings, ruined economy and decimated population Pula fell into disrepute. Nevertheless, due to its geographical position and the importance of its harbor for trade routes, Pula simply could not disappear. The town was saved by organized Croatian and South-Slav settling.

After the revolutionary year 1848, the Austro-Hungarian Empire realized the importance of Pula’s harbor and started an intensive development of a huge naval port and shipyard. This resulted in the gradual settlement of Pula and within 50 years the population increased from 1,126 people to about 40,000.

Pula was still described as a village cut off from the rest of the world, but later on vast sums were invested in the sewage system and infrastructure. Eventually the investments transformed rural Pula into a prosperous town. With the new railway Pula gradually took over the role of Trieste and Rijeka as the main port for Dalmatia. This enabled Pula to develop two functions at the same time – the military and trading one. Under the protectorate of Vienna the official language in Pula was German, but Italian remained the everyday language in use among numerous social classes, while the use of Croatian very soon completely disappeared. Such was the situation during World War II under the fascist rule, when Pula, as an antifascist town, organized its battle for the future under bomb raids and devastation, as well as reprisals over the historically defeated side. After the War and German occupation Pula came under the Anglo-American administration. In 1947 Pula finally turned to its natural hinterland – Croatia (according to the 1943 Resolution that defined Istria as a part of Croatia), and therefore Yugoslavia. This caused still another exodus of the malcontent domiciliary Italian citizens. It marked the beginning of a new period in the history of Pula that lasted until Croatia gained independence.